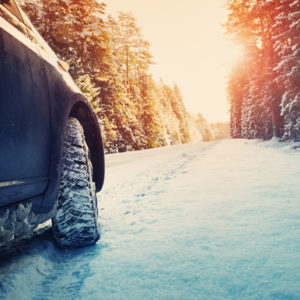 Winter. It often brings to mind mountains of gleaming white snow, children playfully building snowmen and sledding downneatly groomed hills. However, anyone who lives in a winter wonderland knows the true illustration regularly includes a pitch black commute home from work at five o’clock, stuck in a line of vehicles all braving the same frozen and slush covered roads. It’s not as pretty as the first picture – but it’s the reality many of us need to be prepared for during the winter months.

One of the best ways to ensure safe travel during those treacherous winter months is to properly fit your vehicle with a set of reliable snow tires. Snow tires are distinguished by their more aggressive treads and deeper grooves to channel snow and keep more of the tire in contact with the road in bad weather. They often have metal studs to enhance the grip of the tire to the road – what we commonly call “studded snow tires”.

A recent study by Consumer Reports shows most winter/snow tires have better snow traction than the average all-season tires. Snow tires are specially made to handle the cold, slippery challenges that winter can bring. Similarly, a study by Michelin found that three out of four drivers are nervous about driving in the snow, but most drivers using winter/snow tires are more confident driving in snow and less concerned about other drivers and loss of traction. Added tread and studs allow drivers to maneuver vehicles more easily and stop more quickly if needed.

Although there is an initial cost to outfitting your vehicle with snow tires, you can usually get two to three seasons out of the tires and it’s less expensive and stressful than repairing or replacing your vehicle because of an accident.

So, when the cold reality of winter hits and you’re gripping the wheel and squinting to see through the snow, make sure you have the best protection possible with a set of snow tires on your vehicle.